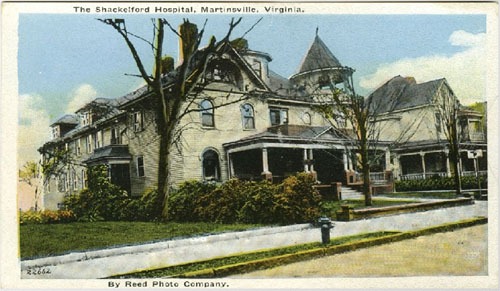 Dr. Jesse Martins Shackelford, MD, was born on December 7, 1869, and reared in Irisburg, Virginia, the son of William George and Pattie Martin Shackelford, a direct descendent of General Joseph Martin.

He was educated in the public schools of his community and then attended Virginia Polytechnic Institute at Blacksburg, later preparing for the practice of medicine at the Baltimore Medical College.

Upon completing his degree in medicine, Dr. Shackelford returned to his native community to practice medicine.  He bought property in Irisburg and built a home, a wing of which was used as a hospital from 1895 to1899.  Five years later, he moved to Martinsville where he remained.  On April 29, 1921, Dr. Shackelford purchased the Teague residence on Church Street and created a hospital there.  The Shackelford Hospital was established in 1921.

Dr. Jesse Shackelford originated the Hospital Association of Virginia and also started the Henry County Medical Society.  He died on October 2, 1941.  The history of Memorial Hospital of Martinsville and Henry County goes back to the 50-bed Shackelford Hospital on Church Street in Martinsville.  This Hospital served the community from 1920 until 1946.

He attended Hampden-Sydney College where he was President of his class and captain of the football team.  He then entered Johns Hopkins University and received his Doctor of Medicine degree after a two-year internship at Johns Hopkins and Union Memorial.

Although he received his formal medical education at John Hopkins, his training as a doctor had begun long before then.  “I used to help my father, Dr. Jesse, with operations when I was a high school student.  He trained me and taught me a tremendous lot.  Practicing medicine wasn’t easy 33 years ago.  I used to operate at night on a kitchen table by candlelight.  There had to be someone standing by fighting off the flies.”

The Shackelford Hospital grew with the community but the time came when larger facilities were needed.  Then Dr. John, along with leading citizens, began a movement that led to the construction of the Martinsville General Hospital.  Dr. John was a surgeon-in-chief in the Martinsville General Hospital, which later became Memorial Hospital.  He was also chairman of the Medical Advisory Board #34, and director of the public library.  He also served on the advisory board of the State Board of Nurses, and was a charter member and past president of the Rotary Club.  He was a member of the local and regional medical societies and the American College of Surgeons, and the American Medical Association.  He was director of the First National Bank, Bassett Furniture Company and others.  He died in 1956.