Agents of Change: Female Activism in Virginia from Women’s Suffrage to Today 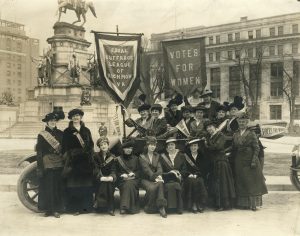 The passage of the Nineteenth Amendment in 1920 radically re-defined the meaning of American democracy by banning gender-based restrictions on voting. This landmark legislation marked the culmination of a concerted fight for women’s suffrage and heralded a new age of female participation in American civic life.

Organized in conjunction with the statewide Women’s Suffrage Centennial, this exhibition celebrates a century of women’s social and political activism in the Commonwealth. Highlighting the efforts and impact of a selection of female change-makers, these women brought about positive change in their communities, the Commonwealth, and the nation. They also created new models of female empowerment and new opportunities for women—ultimately fostering a more inclusive and equal society.

Agents of Change: Female Activism in Virginia from Women’s Suffrage to Today is a signature project of the Virginia Women’s Suffrage Centennial Commemoration and made possible by the E. Rhodes and Leona B. Carpenter Foundation, Mr. and Mrs. G. Gilmer Minor III, and Lynda Johnson Robb.

This exhibit and all other programming is made possible by the Museum’s annual sponsors, Carter Bank and Trust and the Lester Group.